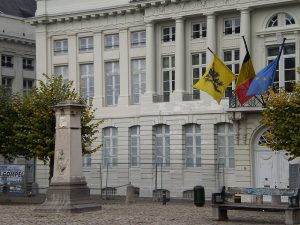 Brussels has had a long and troubled history, caught between powerful neighbors and often the site of battles to decide disputes not of its own making. The early history of the city is a story largely of prosperity, while modern day Brussels has emerged from the scars of two world wars as the capital of not only Belgium, but of the European Union.

While the site of Brussels had been inhabited since before the 10th century, it was only after the town was fortified that it began to grow in earnest. In the 13th century, the town was granted a charter, but soon after, the craftsmen and their guilds became disgruntled with the meddling of the aristocrats in their affairs and began to stage rebellions, one in 1302 and another in 1356.

The purpose of these rebellions were to make the guilds very powerful, and Brussels enjoyed around 200 years of relatively uninterrupted commercial prosperity, with the city’s craftsmen being regarded among the finest in Europe. This dominance was ended by two events; the patronage of nearby Antwerp during the 15th century and the destruction brought about by the Reformation in the 16th century.

The fanaticism of the Spanish Pope Philip II’s Reformation took a particularly gruesome toll on cities caught between the Catholic Low Countries and the Protestant North. Brussels was no exception and its churches, religious arts and buildings were destroyed in a series of attacks.

Even after the Reformation had ended, wars between Europe’s royals over control of this territory often put strategically-placed Brussels right in the thick of the fight, which culminated in the famous Battle of Waterloo, in 1815. During this period, much of medieval Brussels was destroyed.

After the Napoleonic Wars, a new Europe began to take shape. Initially, the Netherlands and Belgium were lumped together as one united country; however, this soon proved unworkable and following a rebellion by the Belgians in 1830, Belgian independence was granted in January 1831, with Brussels as the capital.