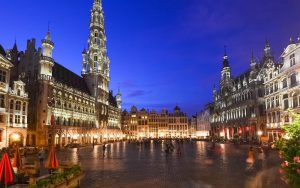 Brussels, one of Europe’s only bilingual capital cities and undisputed crossroad of Europe, continues to grow and thrive. Its old tradition of strong international relations is widely symbolized by its grand halls, fabulous architecture and the Pis Mannekin; the sculpture of a young boy urinating is now the city’s proud symbols.

The city of Brussels is separated into two distinctly different parts that are dubbed Lower and Upper Towns. The sprawling area called Lower Town comes complete with a charming medieval town center that has been established around the Grand Place. The structure includes an intricately designed one hundred meter high tower, with a gilded statue of St. Michel at the very top, and is open to guided tours. The spectacular square outside offers sidewalk cafes, cellar restaurants and the splendid Gothic Hôtel de Ville (Brussels Town Hall). Many roads are pedestrianized and its cobbled streets lead to attractions such as Ste Catherinen, Ilôt Sacré and Marolles.

The Upper Town is very different in atmosphere and appearance, comprising of wide boulevards, major museums and up-market shopping centers; especially in Ave Louise and Sablon. The Belgian parliament building is also found here and is worth a look. Despite being Belgium’s national symbol and known throughout the world, the Manneken Pis fountain is actually rather disappointing due to its small size.

The Cathédrale des Sts Michel and Gudule is a beautiful twin-towered cathedral located in Parvis ste Gudule, slightly away from the city center. By car, the city and surrounding area offer much in the way of interesting local destinations. Brussels is a small and compact city, but many of its best tourist attractions lie on the city outskirts.

Most visitors come to Brussels between May and September, as this period offers the fairest weather. City attractions include the Centre Belge de la Bande Dessinée, found outside the city center, and the nearby Belgian Center for Comic Strip Art should not be missed, especially for fans of Hergé’s Tin-Tin.